Her work utilizes the act of observation, relationships, and formal investigations. Gluszak focuses on the creation of objects, to escape from the mundanity of everyday life. 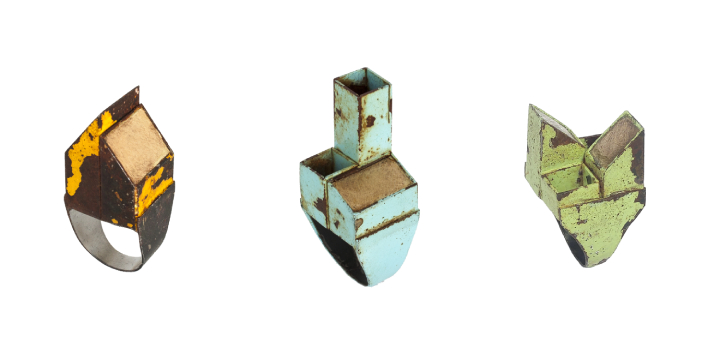 A selection of work from this exhibition is available for sale in the Craft Ontario online shop.

“Hamilton, my hometown on the shore of Lake Ontario, has traditionally been a steel producing centre. Despite the industry having died down in recent decades, its industrial activity is still apparent. ‘Iron Identity’ references my time growing up there, and the impact this place had on me.

Brooches, rings and neckpieces evoke and commemorate this identity through the use of oxides, coarse finishing, and sturdy construction. I use colours associated with industrial machinery and abandoned sites – bright colours that contrast signs of rust and deterioration. Transporting this aesthetic to the body allows it to be worn close, displayed with pride, and given reverence as a jewellery object.

The places and structures I reference directly influenced the culture of Hamilton. These former steel mills, manufacturing facilities, and factories provided good, working class jobs, and were once economic symbols announcing the prosperity of the city. Now that we have moved into a post-industrial economy, these places look dirty and out of place. I grew up around the last of these industrial sites when the flame of industry was already diminished. I feel compelled to record the physical and emotional identity of this city in order to come to a better understanding of my own identity.”

Alex Kinsley Vey is from Hamilton, Ontario, where he received jewellery training from his parents. Moving to Toronto in 2010, Alex studied jewellery at George Brown College, receiving an Advanced Diploma in Jewellery Arts in 2013. Alex has shown work in Canada, Europe, and the United States. He has been a member of Craft Ontario since 2012, Klimt02 since 2017, and was a Harbourfront Centre Craft and Design Artist-in-Residence from 2015-2019. He is currently a member at Jewel Envy in Toronto's west-end. Alex is a sessional instructor at OCAD University in Toronto, and has previously taught at George Brown College in Toronto, and NSCAD University in Halifax.

The artist gratefully acknowledges support from the Toronto Arts Council. 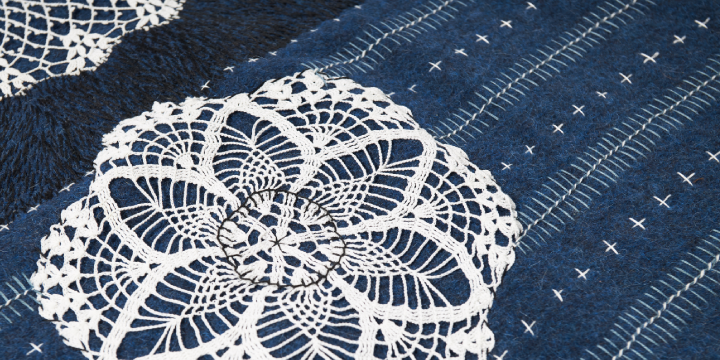 The crisis of the global COVID-19 pandemic has drawn into sharp focus our collective global vulnerability against the threat of an unknown enemy. It has forced us to change our habits, from the way we work, shop, travel exercise, and perhaps most importantly, greet and visit friends and loved ones. It has forced us to ask critical questions such as: What does it mean to be safe and secure? How can we protect ourselves, our families, our friends and strangers? How can we secure our country from incoming, potentially unseen threats?

Coming at a time when we are all searching for comfort and the assurance that we will be safe, the SECURITY BLANKET series seeks to explore the above questions and more. The first object to touch a newborn baby, the blanket offers warmth and reassurance, but the blanket continues to be an object associated with well-being and security long after early childhood. Security is defined as a state of being safe and free from worry, but is there more to its meaning than initially suggested by this dictionary definition? SECURITY BLANKET explores two notions of security. First, the security of the home – represented by antique, handmade domestic textiles such as doilies and lace. And second, the security of the state – represented by eight government-issue military blankets from Australia, Canada, Germany, Great Britain, Italy, Russia, Switzerland and the United States. These repurposed objects constitute a blank canvas onto which another layer of meaning can be added to their already nuanced histories. The intricate patterning created by the use of traditional embroidery stitches integrates these two divergent representations of security on both a physical and conceptual level, producing works of visually interesting contrast that provoke the viewer to consider their own relationship to home, comfort, safety and security.

Jennifer Smith-Windsor is a textile artist based in Stratford, Ontario. She was the 2019 recipient of the Craft Ontario Helen Frances Gregor Award for excellence in contemporary textile and in 2010 received the Mary Diamond Butts Scholarship in Embroidery and Needlecraft, also from Craft Ontario. Jennifer’s art practice focuses almost exclusively on hand embroidery. When hand stitching, she deliberately uses a limited range of stitches, exploring the wealth of possibilities that this restricted repertoire offers. Vintage, handmade textiles figure prominently in her work as reclaiming them and giving them a second life is incredibly important to her. They act as her starting point, a blank canvas onto which another layer of meaning can be added. She has always been drawn to cloth; embroidering as a child, sewing her own clothes as a teenager, studying textiles at university, working in theatre costume departments as a young adult and now with an active textile art practice. It is cloth’s intimate relationship to the body, its ubiquity in our lives, its associations with the home, its links to the past and its relevance to the future that continues to inspire her. 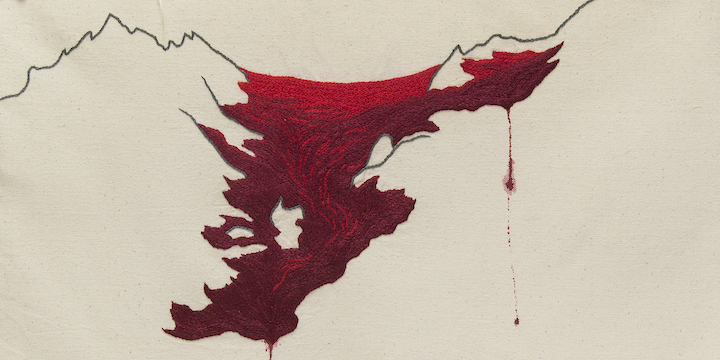 Responding to the current era of rapid and accelerating change to the landscape, ‘Mass Wasting’ explores the impact(s) of environmental destabilization through the lens of craft practice.

Through both direct and indirect human intervention, the form of the Earth is changing. Extractive mining practices and deforestation have immediate and obvious effects, while warming temperatures are causing unprecedented thawing of permafrost. The term ‘mass wasting’ refers to the geomorphic process by which rocks and soil move downhill (eg. rock slides, soil creep and thaw slumps). ‘Mass wasting’ is both cause and effect: the means by which we have arrived on this increasingly unstable ground.

This exhibition aims to address the psychic, social, cultural, and political impact of environmental unpredictability as identified by artists working in diverse craft media. It also considers the ways in which instability can open up fissures of possibility — opportunities for change and innovation.

'Slice' is a collection of jewellery expressing my fascination with the microscopic realm of the human body. Abstract forms refer to bacteria, viruses, cells and their structures within us. As these invisible but universal components come to define us, they also acquire cultural meaning independent of their biological definition. The highly aestheticized microscopic imagery and cutaway diagrams from popular science are particular sources of inspiration for this work: geometric forms, graphic patterns and vibrant colours. The forms are “digitally handmade” using a combination of computer modelling and 3D printing technologies with traditional metalworking techniques of forming, fabricating and finishing. Slicing through these forms reveals surprising and pleasing sections and patterns. However, the slice, like a microbe itself, exposes tensions between the benevolent and sinister, the beautiful and ugly, the fascinating and fearful.

Paul McClure is an Irish-Canadian artist and designer of contemporary jewellery. His work is represented in private and public collections including the Montreal Museum of Fine Arts; Canadian Museum of History; Design Museum of Barcelona; and National Museums Scotland. McClure graduated from NSCAD University, Halifax, Canada (BFA, 1989); Escola Massana, Barcelona, Spain (1990); and National College of Art and Design, Dublin, Ireland (MA, 1999). He is professor in the School of Fashion & Jewellery at George Brown College, Toronto. In 2015, McClure received the Saidye Bronfman Award, a Governor General’s Award, Canada’s foremost distinction for excellence in the visual arts.

'Art of the Book 2018' is organized by the Canadian Bookbinders and Book Artists Guild.

To see more info about the exhibition, including a gallery of the juried works, visit artofthebook18.ca.

An exhibition produced by the Metal Collective.

Inspired by Canada's 150th Anniversary in 2017, this collection of contemporary silver candleholders, made from heritage silver, honours Canadian women's creative past and inspires their future.

Illuminations is a travelling exhibition produced by the Metal Collective and curated by Laura Brandon, featuring the work of:

Craft Ontario ’19 surveys the work of members across the province, and presents the very best of contemporary craft.

The exhibition includes work from each of the core regions of the province, with four exhibitors selected by the jury to be recognized with awards for Best in the North, East, Southwest, and Central Ontario.

Working with clay actively engages the body. The artists in this exhibition trust that their lived experiences, stories, and skills are indwelled in the muscles used to make their work.

Experiences of injury and recuperation informed the theme to the Muscle Memory symposium. One of the purposes of the residency is to demonstrate the power and the skill of artists with disabilities.

During each of the residencies the artists became a strongly knit community. Many of the artists have noted the mentorship, and guidance they received from their fellow participants. It is remarkable to imagine the strength and trust that was built and cultivated not just within their own bodies as they worked with clay, but also with each other.

All of the works explore various themes surrounding tacit knowledge, and the body’s ability to bounce back, grow, resist, and remember.

*The title of this exhibition was inspired by the title of Mari Sorri’s seminal article The Body Has Reasons: Tacit Knowing in Thinking and Making, which was inspired by Blaise Pascal who wrote “the heart has reasons which reason knows not of”. 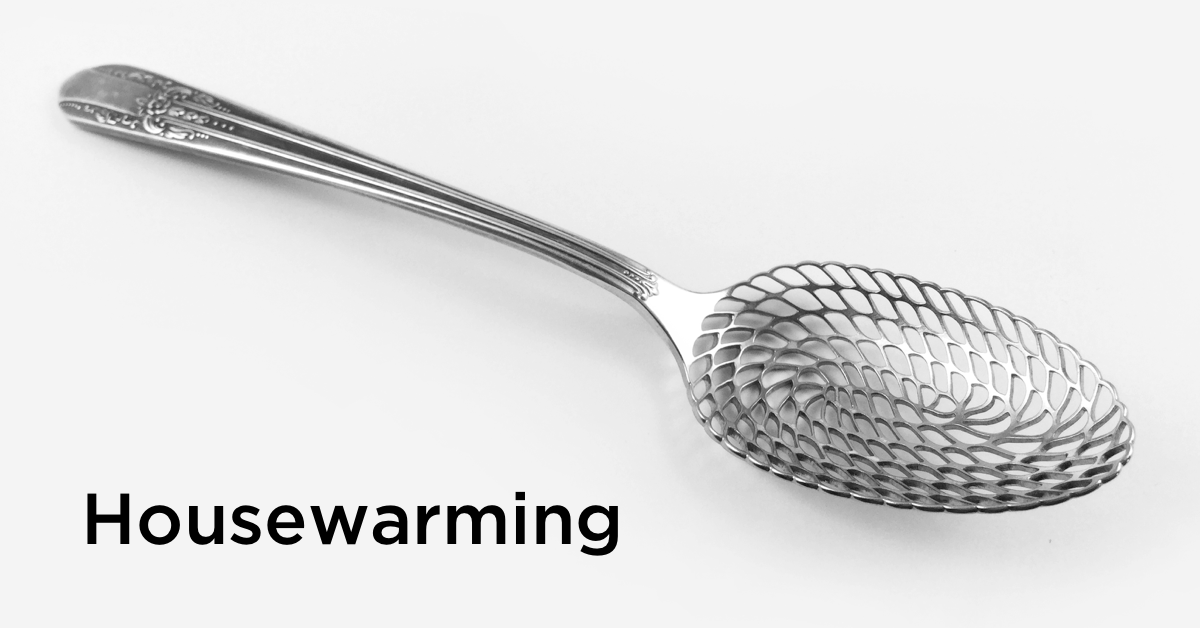 Housewarming explores the idea of home through objects that make references to habitational spaces, activated through the routines of day-to-day life.

Works in this exhibition range from functional to representational forms, and many share a relationship to the body through suggestions of sustenance and care. Other works may problematize the idea of the home, gesturing instead towards a subversion of stereotypical images, questioning whether or not these are always welcoming spaces.

All of the work in the exhibition shows a skillful deployment of materials in ways that speak to varied and complex relationships with the idea of home.